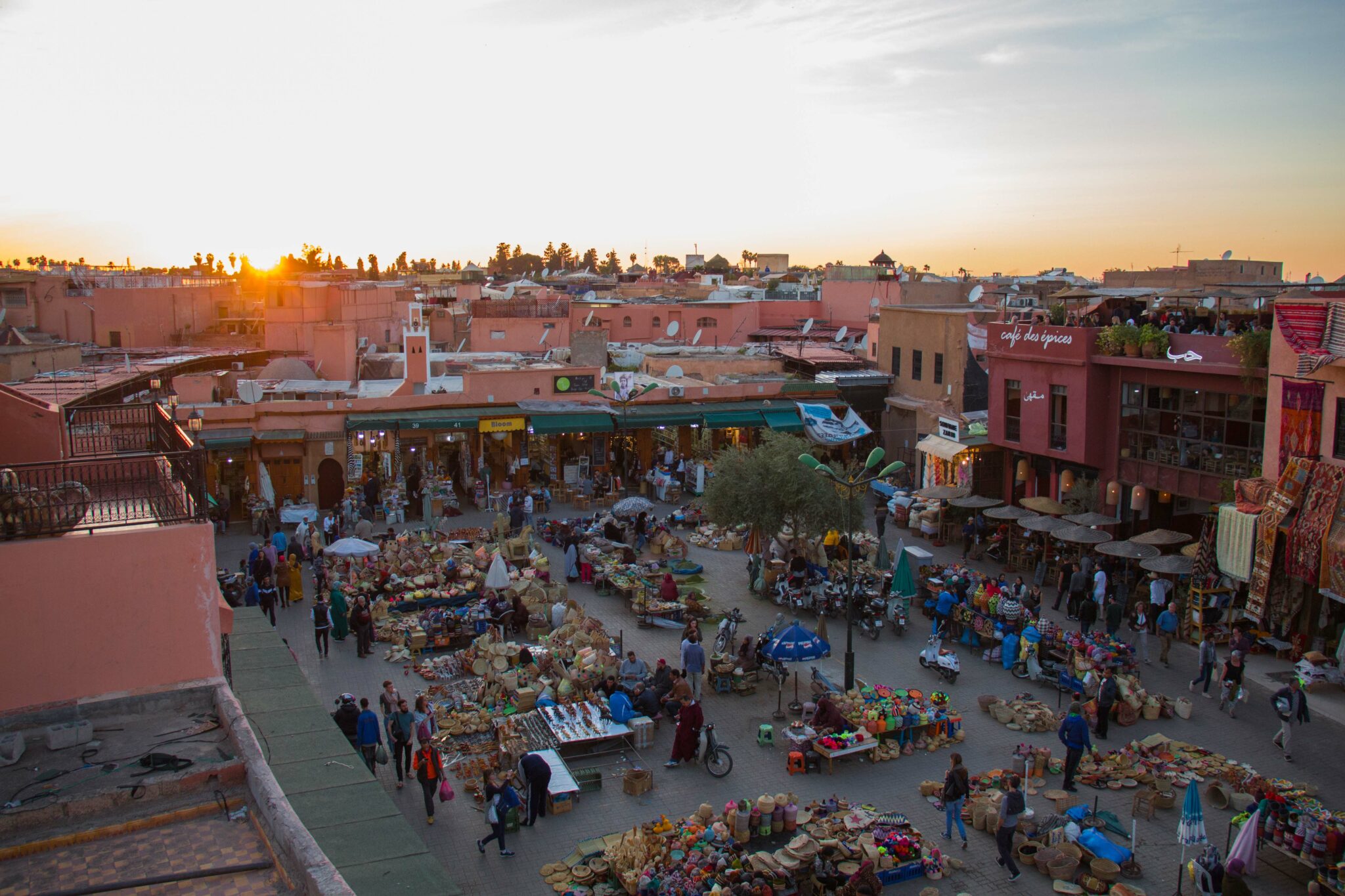 Morocco is a very different country for what I am used to, but surprisingly beautiful.
We landed in Marrakech airport where it took us 1h30min to have our passports scanned at the border. Get ready to wait, airports in Morocco work in a very different way, where you have to get your bags scanned at the airport entrance and also when you leave the airport. You don’t need a visa to visit the country, you just need a passport valid for at least 6 months.

Here are some useful tips:

– Please respect and dress accordingly, especially if you are a woman. Cover shoulders and knees.
– Almost everyone understands french, so if you speak the language you’re ok.
– Avoid walking in the Medina at a late time, some Souks close (some actually have doors) and it makes it difficult to reach some streets.
– Roaming is very expensive in Morocco, so buy a SIM card at the airport or at the city centre. I recomend Maroc Telecom, which costs around 10€ for 4gb of data. Directions on Google Maps don’t work inside the Medina and it is easier if you download the map so you can use it offline.
– Some shop owners get very upset if you photograph their stands, so be quick when taking pictures.
– There are still some false guides offering help with directions or recommendations for shops and restaurants (from which they get commission). Just be firm when declining their help. If you are lost, it’s better to ask to the nearest shop owner.
– Pay attention to ATM’s in the streets as there are frequently card cloning devices set up on them. One person I know got her credit card cloned at one ATM in Marrakech, so always check your bank account. The currency is dirhams (MAD) and I used Monzo all the time to pay and also to withdraw money. Revolut or N26 are some alternatives for those not living in the UK. Anyway, it’s always better to have some cash on you, especially some change.
– Moroccan oranges are the best, so do yourself a favour a drink a lot of freshly squeezed orange juice.

Some people keep asking me if Morocco is a safe country. Well, I am not going to lie and I will say that at the beginning I didn’t feel very comfortable, and I’ll explain you why: it’s one of those places where you have to put your backpack to the front at all times as there are some pickpockets. If you have a very good camera or phone, people will stare at it. Also everyone tries to get money from you, like taxi drivers or false guides. If you are a woman, especially with light skin and hair, you are going to get some “looks” and bugging (“oh nice hair” or “nice legs”), you can also be traded by some stupid amount of camels and, to be honest, I felt quite uncomfortable with that. Besides all this, I felt safe and I found very nice and polite Moroccan people along my journey.

Marrakech is a city full of colour, scents and tastes. Get lost in the Souks and you will see what I mean…

We stayed right in the centre of the Medina, on one of the most instagrammed Riad’s: Le Riad Yasmine. And you might be asking yourself “what’s a Riad?”… The word Riad refers to traditional Moroccan houses or palaces with an interior garden or courtyard. They are usually guest homes with few bedrooms.
I’ve been following their instagram for a long time and I always dreamt about staying with them. Alice and Gabriel, the owners, are a young french couple that are very friendly with all their guests. The rooms are spacious, the swimming pool is cute and the terrace is amazing to catch some sun. Breakfast is very good and somehow changes everyday. We stayed in another Riad’s but this one was purely magical. They are always full, as they just have 8 bedrooms, so if you want to stay with them you need to book in advance. The room rates are usually around 90€ per night.

There are also some other Riad’s that I can advise: Riad Jardin Secret, Riad BE Marrakech, Riad Shukran, Riad Dar Nimbus and Riad Edward. I really think that you should try a Riad at least once so you can get the full Moroccan experience. They can be a bit more expensive that hotels, but it’s totally worth it! We also stayed one night at Riad Les Yeux Bleus, but we found it very pricey.

My favourite things to do in Marrakech

– Jardin Majorelle and Yves Saint Laurent Museum. This was definitely my favourite place in the city. It’s full of beautiful cactus and the famous blue Majorelle is incredible! To avoid queues and crowds, be sure you get there early.

– Jemma el-Fnaa. In this market square you can find food, snake charmers, chained monkeys (and some other exploited animals unfortunately), dentists (ah!), storytellers, musicians and performers. Don’t stare too much at the snakes or monkeys, as the owner will bring them to you and ask you for some money. At night, the food stalls come out and it’s a nice place to have dinner.

– Le Jardin Secret, a place where you can relax and escape from the chaos of the Medina and have a nice meal.

– El Badi Palace, which is a ruined palace, but worth visiting.
– Visit the amazing La Mamounia hotel, if you can’t afford to stay the night.
– Ben Youssef Madrasa, which was an Islamic college. Unfortunately it is closed for renovation works until 2020.
– Get lost in the Souks. The best one to find saffron and spices is in the Mellah (Jewish quarter), near Bahia Palace, Avenue Haumann el Fetouaki/Rue Imam el Rhezoli. My favourite Souks are Souk Haddadine (lamps and lanterns), Souk Belaarif, Souk Cherratine (leather, artworks and handicraft), Souk Kchacha (dates, fruits and olives) and Souk Semmarine (shoes).

– If you have time, take a trip to to desert, Ait Ben Haddou (where they filmed various movies, including Game of Thrones), Atlas Mountains or Ouzoud waterfalls. I wouldn’t get a tour that has been sold on the street, as they are not trustworthy, the best is to ask the hotel or riad where you are staying. If you don’t want to go on a tour, you can also rent a car (search on AutoEurope or try this local car rental company called MedLoc Maroc). About desert camping, I definitely recommend the Scarabeo Camp. I had some friends having some bad experiences in other camps, like sleeping with the same blanket you used to ride a camel or the toilet being a hole in the sand. Bare in mind that to get to the desert there are just two options: to ride a camel or a quad bike.

– Your Riad. Usually Riad’s have very nice Moroccan food.
– Nomad.
– Chez Yassine, if you are tired of Moroccan food and fancy a pasta or pizza. Very cheap and good!
– I Limoni.
– Zwin Zwin Cafe.
– Henna Cafe.

After 3 days around Marrakech, we took a Supratours bus to Essaouira, which costs 70 dhs per person. The buses are really comfortable and the tickets are cheap, although you should buy it the day before to avoid waiting for the next bus, which happened to us. The journey takes around 3 hours.

Essaouira, Morocco’s windy city, is a hidden gem! We stayed at Hotel Villa Quieta for two nights, just next to the beach. The city is very calm and the Medina is much more smaller than the one in Marrakech and it’s easier to walk around. I really wanted to escape from the chaos of Marrakech and Essaouira was perfect for that.

– Explore the Medina. It’s a small Medina, which means you can explore it without the fear of getting lost. I really enjoyed the peace and the tons of blue of this place!

– Visit the fish market and the harbour, where you can find the typical blue boats.

– Enjoy lovely sunsets by the beach.

– The Loft, my favourite, with incredible flavours.
– Zahra’s Grill, which as a spanish chef and he definitely knows how to prepare fish.
– Restaurant du Coeur.
– If you seek fresh grilled fish, there are some nice stands near the port.

It feels like there’s still so much to discover in this two amazing places… I hope to come back to explore it with more time go I can get to know it better.